We Contain Multitudes: Walt Whitman, Charles Darwin, and the Song of Empathy 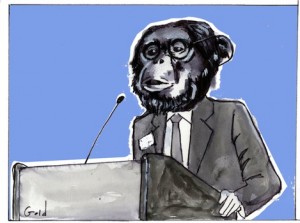 Dark portents of civil war were looming as the American poet Walt Whitman celebrated the transformative song of empathy. “I do not ask the wounded person how he feels,” he wrote in his 1855 book Leaves of Grass, “I myself become the wounded person.” The ensuing battle over slavery, an institution that Charles Darwincalled “the greatest curse on Earth,” would seem an unlikely place to find hope in human potential. And yet, as Whitman wrote during his volunteer service with wounded Union soldiers, “I’ll pour the verse with streams of blood, full of volition, full of joy.”

Darwin’s On the Origin of Species was published in the United States one year prior to the first fateful shots at Fort Sumter that began the bloodiest conflict on American soil. With few exceptions, naturalists in the United States greeted the theory of natural selection the same way that celebrated paleontologist Louis Agassiz did, as “a scientific mistake, untrue in its facts, unscientific in its method, and mischievous in its tendency.” What was worse, critics claimed that Darwin’s theory divided moral sentiments from divinity and pitted science against humanity. And yet, for Walt Whitman, the advent of Darwinism meant that “the world of erudition, both moral and physical, cannot but be eventually better’d and broaden’d in its speculations.” Whitman’s vision of empathy was one that embraced a Darwinian nature.

← Truth of the Matter
Human Nature and the Moral Economy →
Tweet